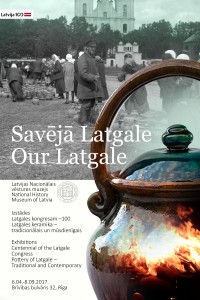 From April 6 to September 8 the mobile exhibition “Centennial of the Latgale Congress” and the exhibition “Pottery of Latgale: Traditional and Contemporary” are on display.

The exhibition cycle “Our Latgale” is the opening event of the program of the National History Museum of Latvia dedicated to the centennial of Latvia, underlining the idea of united Latvia in the spring of 1917 as a key component of the state formation process.

The Republic of Latvia was created in 1918 by unifying three separate administrative territories – the former provinces of Kurzeme (Courland), Vidzeme (Livonia) and three districts of Vitebsk province (Latgale region). A year earlier, the idea of a unified Latvian nation with its self-determination in all historical regions of Latvia was supported. A crucial event on the way to united Latvia was the Latgale Congress held in Rēzekne on April 26-27 (May 9-10, New Style) 1917. Its delegates expressed the support to separate Latgale from the province of Vitebsk and to unify with Latvian territories of the Baltic provinces – Vidzeme and Kurzeme. It was a decision not only of the administrative-territorial belonging, but also of Latvian nation’s future.

The political topic of spring 1917 – the ideas of the united and autonomous Latvia – was determined by long-term historical experience. Therefore, the mobile exhibition “Centennial of the Latgale Congress” is dedicated not only to the Latgale Congress and its decisions, but it also marks those historical peculiarities, which characterise different developments in government, economy, social and cultural life, national identity for almost 300 years since the territory of Latvia was divided between several political powers.

The objects from the museum collections depict the spread of Catholicism, Polish language and the administrative system in Latgale, the Russification policy, carried out by the central government of Russian empire at the end of the 19th century, the national identity of the Latvians in Latgale in the beginning of the 20th century. Among the objects, the visitors can also see an interpretation of the process of the Latgale Congress of 1917 held in cinema “Diana” in Rēzekne by artist Jēkabs Strazdiņš, drawn in the mid-1930s.

The exhibition “Pottery of Latgale: Traditional and Contemporary”

The traditions, characteristic to the pottery of Latgale, began to form in the Stone Age, as it is proved by the evidence of material culture, found in archaeological excavations – pieces of pottery left behind by the ancestors of the inhabitants of Latvia.

In the present day, the pottery of Latgale is a multifaceted area of applied arts. Through the time, new methods, modern tendencies in creating clay pots, new clay compositions, new processing techniques and new shapes of utensils have appeared. Yet the historical traditions, the application of ancestral experience in the process of clay processing and love for work, which is strengthened by the sense of the pottery of Latgale experience and potential, have remained unchanged.

The visitors are able to see around twenty works of the potters of Latgale – the representatives of Applied art studio “Rēzeknes apriņķa pūdniki” (The Rēzekne district potters) and Andrejs Paulāns Applied art studio. The exhibition is complemented with large-scale portraits of the potters of Latgale by the member of the project “Latvijas zelta pods” (The golden pot of Latvia) Elīna Kursīte.

Only till March 31 Exhibition “The End of the Prague Spring. The Tragic Protest of Student Jan Palach”
Exhibition "Pottery of Latgale: Traditional and Contemporary" opened till September 8