History of the Museum

The National History Museum of Latvia, the largest repository of Latvian material culture, was founded in 1869 as the Museum of the Science Committee of the Riga Latvian Society.

Right up until the 1860s, Riga was a fortified bastion, with its infrastructural and economic development determined by military strategy. It was only following change in strategic considerations, and after dismantling the fortifications, that this ancient trading town developed into an industrial centre with a multi-national population. According to the census of 1867, of the 102 590 citizens 42.9 % were German, 25.1 % Russian and 23.6 % Latvian. Contemporary author Matīss Kaudzīte characterized his own national segment of the population as follows: “Until the middle of the last century Latvians did not recognise themselves as such, but referred to themselves as none other as farmer, for this is how they were called by those who seemed to be, or were, the above them. And indeed, by occupation and status they were nought else. Even if the appellation “Latvian” was employed, this was understood to mean farmer, because none imagined that farmer and Latvian were two separate concepts.”

The Latvians who had gained prosperity in Riga learned the German language and often denied their ethnic roots. It was not easy to identify their compatriots in the city.
Conditions changed during the latter half of the 19th century following the repeal of discriminatory legislation against farmers. Increasing numbers of Latvians came to Riga and their lifestyles underwent profound changes. The development of a Latvian identity and a growth in its intelligentsia led to an enhanced level of national self-esteem, and Latvians found a need for a social organization to enable purposeful gathering and a venue for cultural recreation, exchange of information and furthering of knowledge.

The Riga Latvian Society House, where two rooms were shown to the RLS Museum. 1887

The year 1868 gave an opportunity for the foundation of the Riga Latvian Society (hitherto referred to as RLS). Under its auspices functioned a number of cultural committees, including a Science Committee. This body began gathering materials to enable the establishment of a Latvian museum as opposed to the existing with their Germanic orientation. Initially within the first decades the new museum accepted all that was offered. Next to archaeological, ethnographic and numismatic collections, grew those of geological, zoological and botanical nature. Although the Museum was devoid of permanent venues for either exhibition or storage, these collections continued to grow. The first short lived ethnographic exhibition was mounted in RLS quarters in 1890. Due to the lack of space, the collected items were kept in boxes and lockers. In 1983 the Science Committee resolved that ” the Museum shall collect items which are related to ethnography and history of the Baltic nations, including those of the Lithuanians”.

The RLS decided to organise an exhibition of Latvian ethnography to coincide with the Tenth Pan-Russian Archaeological Congress in Riga in 1896. In order to prepare for this, the Science Committee organised ten scientific expeditions for the collection of museum items from several localities in Latvia. As a result, some 6000 ethnographic items were collected, thus heightening the Latvian society’s interest in their history. The exhibition, which reflected traditional lifestyles and occupations, was highly successful: during the period of 1 August to 15 September 1896, there were some 45 000 visitors. Museum was made available for public viewing in 1895. This presented new avenues for educating the people and strengthening national awareness.

In 1903, the RLS purchased a new building in Pauluči Street (today Merķeļa Street), and provided rooms therein for the Museum.  In 1914 public donations enabled the beginnings of dedicated museum building construction, but this was interrupted by the First World War and the project was never completed. 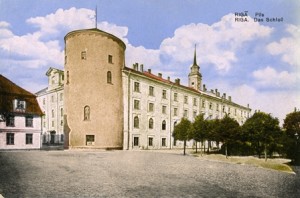 Following the national declaration of independence in 1918, the RLS transferred the Latvian museum collection to the Government. In 1920 the Museum was provided with rooms within Riga Castle. In 1924 the Museum was granted a national status and a new name — The State Historical Museum. The statutes of the State Historical Museum stated that its function was to “collect, preserve, exhibit and popularise the ancient and modern cultural heritage which is of significance to the history of Latvia”. Regulations issued by the 1932 government defined a place for and the importance of the Museum in national cultural policy: “The State Historical Museum is the central repository for the nation’s ancient artefacts, whose role is to collect, preserve, exhibit and popularise those Latvian cultural items and monuments which possess archaeological, ethnographic, historical or artistic significance, and that are in the Latvian national interests to preserve and study”.

The period from 1920 until 1940 was a prosperous one for the Museum. The collections were enriched, the number of museum workers increased. The Museum gained guardianship of items from the expeditions and archaeological excavations of the Monuments Board, as well as recently found hoards. Exhibitions of archaeology, ethnography, numismatics and religious art were developed. Staff of the Museum became actively involved in research — they conducted archaeological excavations, organized collecting expeditions, contributed scientific articles to the Monuments Board publications, journals and various compilations. In 1930, Riga hosted the Second Congress of Baltic Archaeologists, during which the Museum in collaboration with the museums of Berlin, Konigsburg, Stockholm, Helsinki, Tartu and Warsaw mounted a major exhibition on the prehistory of the Baltic peoples. Exhibitions were mounted in Paris in 1930 and 1936. The Museum opened branches in other Latvian cities. In 1939 the Museum’ s collection contained 150 000 items. 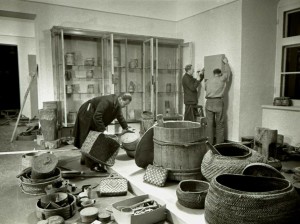 The occupation and incorporation of the Republic of Latvia by the Soviet Union in 1940, and the subsequent occupation by Germany in 1941, while hindering, failed to halt work at the Museum. When retreating from Riga in 1944 the Germans appropriated the most valuable items from the Museum. Thanks to the selfless dedication of Mary Greenberg from the Ethnography Department, who accompanied the collection to Germany, it was possible to reclaim almost all of the items. 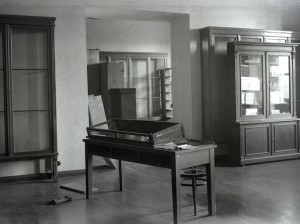 Museum after the departure of the German army. 1944

Following the Second World War, collection, documentation, storage and exhibition work were transformed to comply with the policies of the Soviet Union. The name of the Museum was changed several times: the Latvian SSR Central State History Museum (1944), the Latvian SSR History Museum (1956), the History Museum of Latvia (1989). Irrespective of ideological restrictions, the Museum continued to carry out its prime functions – the collection, conservation, research and popularisation of Latvian historical evidence.

The Museum had lost almost all of its workers as a result of war, emigration and repressions. However, the Museum managed to re-form a professional core of workers in a fairly short space of time.

Irrespective of the fact that some collections were given to other museums as a result of repeated reorganization, the Museum collection continued to grow. In 1989 it comprised 571 000 items. Serious attention was turned to the conservation of museum collection items, developing the potential for conservation and restoration work.

Museum workers conducted archaeological digs, carried out surveys of monuments and conducted ethnographic and historical collecting field trips. Their work is attested to by collections of writings in “Archaeology” (1962), “Ethnography” (1964) and “Numismatics” (1968), the monographs “Sarnāte Swamp Settlement” (Lūcija Vankina, 1970), ”The Earliest Hoards in Latvia” (Vladislavs Urtāns, 1977) etc. The Museum developed the permanent exposition of Latvian history which encompassed the period from the 9000 BC until 1940, which saw several subsequent revisions and updating. The Museum became active in developing temporary exhibitions, which were dominated by the themes of Latvian spirituality and material culture. The more notable exhibitions include “Latvian National Costumes” (1948, 1958, 1964), “Knitting” (1956, 1966), “Ceramics” (1957), “Latvian Folk Art” (1950, 1956, 1967, 1968), “Latvian Jewellery” (1957, 1971), “Archaeological Excavations in Latvia 1940–1975” (1975), “Ornaments of Our Ancestors” (1990) and others.

The Museum was actively involved in the events of the Third Latvian Awakening. Huge popularity was enjoyed by the exhibition “Latvia Between Two World Wars” (1988). This was viewed by 300 000 visitors. Notable also are the exhibitions “Victims of Stalinist Repression in Latvia” (1989), “The Cavaliers of the Order of Lāčplēsis” (1989), “The Year 1940 in Latvia” (1990) and others.

The Museum’s Activities since 1991

Following the renewal of independence in 1991, the Museum as a whole has seen a successful transition to the new working conditions. It was accredited in 2000 and again in 2004 as complying to State level museum standards. Since 1 September 2005, the Museum operated as a State Agency and officially titled the State Agency National History Museum of Latvia. The status State Agency it retains until 8 January 2013.

The Museum has a professional staff, who work at both national and international levels. The Museum collection, comprising around 1 million items, gives a unique and comprehensive overview of the material and intangible heritage of Latvia and her people. Museum staff actively participate in the conservation, research and popularisation of the collection. 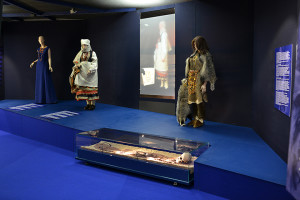 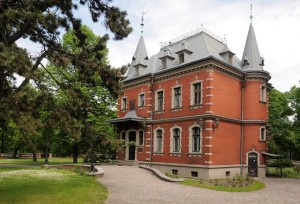 The Museum has contributed to many projects and the organization of exhibitions on both the national and international levels. An interesting joint project with Sweden was “Three Stars – Three Crowns” (Riga 2001, Stockholm 2002).

The Museum organizes seminars and conferences, and its scientific lectures have become traditional. International undertakings of interest have included conferences on Political and Economic Centres on the Baltic Coast 9th–12th centuries, the Valdemārs Ģinters Memorial Conference (1999), Semigallians (2003) and others.
Museum workers have presented papers at conferences and seminars within Latvia, but also internationally — in Lithuania, Estonia, Russia, Poland, Germany, Sweden, the Netherlands, France, the United States of America, Taiwan and elsewhere.

The Museum is constantly improving its public offerings. Thus, in 2005 the permanent exposition of the Museum includes a special stand for the visually impaired. A special education programme has been developed for school students. The most popular are: “Medieval Knights”, “Ancient School” and others. 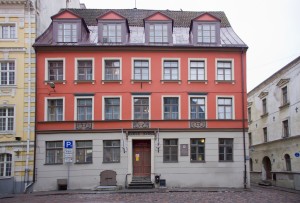 From March, 2008 till February, 2017 Museum Park of Āraiši was a division of the National History Museum of Latvia. The museum is the Lake Castle, which consists of reconstructions of buildings of Stone and Bronze Age where settlement of Latgalians in 9th–11th century was. There are also ruins of medieval castle dated back to Livonian time.

January 2010 Latvian Culture Museum Dauderi joined to the National History Museum of Latvia. Museum’s building was built in 1897 as “Waldschlösschen” (at present – “Aldaris”), family mansion of the owner Adolf von Bingner. It is surrounded with the park created in the beginning of 20th century by Georgs F. F. Kūfalts.

January 2015 the Popular Front Museum joined to the National History Museum of Latvia. It is one of the repositories of the Latvian contemporary history’s testimonies. In the museum’s collection there are unique evidences (objects, documents), which tell about the Latvian people’s struggle for freedom, about the Third Awakening.

From the May 15, 2014 the permanent exposition and exhibitions are located in temporary space – at Brīvības boulevard 32, but the administration, museum specialists and stocks until February, 2020 were located at Lāčplēša 106. After the renovation of the Rīga castle the exposition is planning to return to its historical home, while the collection is moving to  Pulka 8. 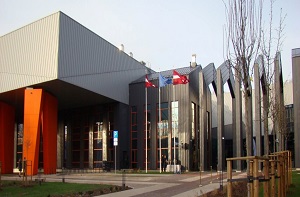