Only till March 31 Exhibition “The End of the Prague Spring. The Tragic Protest of Student Jan Palach” 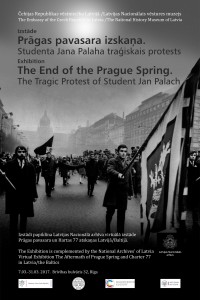 In collaboration with the Embassy of the Czech Republic in Latvia from March 8 till March 31 in the premises of the National History Museum of Latvia (Brīvības bulvāris 32) new exhibition “The End of the Prague Spring. The Tragic Protest of Student Jan Palach” will be on display.

The exhibition is presented on 24 printed banners in English and Latvian and it tells the story of life and legacy of Jan Palach (1948-1969), who was a  student of the Faculty of Philosophy at the Charles University in Prague. He set himself on fire as a protest to Soviet invasion on January 16, 1969. The main reason for his radical act was the growing apathy in the society regarding the occupation of Czechoslovakia. His funeral was the last mass manifest in support of the national ideals and only the protests for the occasion of the 20th anniversary of his self-sacrifice gave the society new hope and led the way to the collapse of the totalitarian regime. The exhibition also depicts the projects of the architectural competition announced for the memorial of Jan Palach in his home town Všetaty, which is going to be opened in 2018.

The visitors will also be able to see the virtual exhibition “The Aftermath of Prague Spring and Charter 77 in Latvia/the Baltics”, which has been elaborated by the National Archives of Latvia.

Only until December 17 exhibition “The Latvians: an Interpretation. Latvian Ethnographic Exhibition of 1896”
Exhibition Cycle "Our Latgale"