Exhibition “Pottery of Latgale: Traditional and Contemporary” opened till September 8 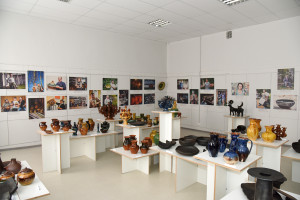 Only till September 8 in the small exhibition hall of the National History Museum of Latvia, located on Brīvības bulvāris 32,  exhibition “Pottery of Latgale: Traditional and Contemporary”  will be on display.

The traditions, characteristic to the pottery of Latgale, began to form in the Stone Age, as it is proved by the evidence of material culture, found in archaeological excavations – pieces of pottery left behind by the ancestors of the inhabitants of Latvia.

In the present day, the pottery of Latgale is a multifaceted area of applied arts. Through the time, new methods, modern tendencies in creating clay pots, new clay compositions, new processing techniques and new shapes of utensils have appeared. Yet the historical traditions, the application of ancestral experience in the process of clay processing and love for work, which is strengthened by the sense of the pottery of Latgale experience and potential, have remained unchanged.

The visitors are able to see around twenty works of the potters of Latgale – the representatives of Applied art studio “Rēzeknes apriņķa pūdniki” (The Rēzekne district potters) and Andrejs Paulāns Applied art studio. The exhibition is complemented with large-scale portraits of the potters of Latgale by the member of the project “Latvijas zelta pods” (The golden pot of Latvia) Elīna Kursīte.