The history of the house Dauderi 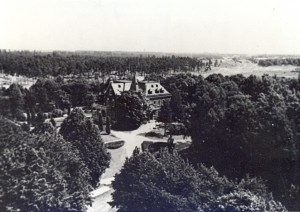 In 1880, Adolf von Bingner became the owner of the brewery Waldschlosschen (currently Aldaris). He was a certified engineer – a chemist. Bingner not only modernized the brewery but also built a family house close to it.

In 1897, the construction of the family house Villa fon Büngner was finished. The author of the project was Fricis Zeiberlihs (Seiberlich), a civil engineer who was also the author of the brewery complex, thus both the summer house and the factory made up a unified ensemble. The construction was done by R. Hoisermans (Häusermann) company. Already in that time it was recognized as one of the most beautiful private houses in Riga.

On the first floor were representation rooms, a music room and a dining-hall. On the second floor were private rooms. The house has a spacious attic as well as terraces, balcony and arcades.

In 1898, a park (nowadays known as Aldaris park) around the Bingner summer house was designed by the remarkable German landscape architect and the director of Riga city gardens Georg Friedrich Ferdinand Kuphaldt. Kuphaldt designed Bastejkalns, Riga canal, Esplanāde, Arkādija and Mežaparks parks. The territory of the Bingner summer house park is 2.2 ha big and according to the relief it was divided into two parts: the upper part is made in regular shapes, the lower part – in landscape style with a pool, fountain, artificial castle ruins and a rotunda.

Robert von Bingner – Riga town councillor (from 1869), burgomaster, the first mayor of Riga (1878 – 1885) after establishing the town council, was also part of the Bingner family. 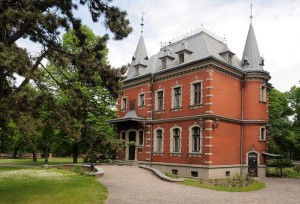 sident of Latvia Kārlis Ulmanis celebrated his 60th birthday. Many organisations and unions congratulated the leader and presented him gifts. The stock company Latvijas Kredītbanka granted him Dauderi villa as his summer house. Prior to that the house was renovated; various improvements were made, and the house acquired some patriotic characteristics in its interior design e.g. there were furniture made according to the sketches of Ansis Cīrulis. President had his office in this house. During this time in the park was magnificent greenery, botanical collection mainly consisting of plants given to Kārlis Ulmanis as presents. In the park next to the pool a pool house was built, near it – a tennis court and in the artificial castle ruins was built a room in Latvian style.

The ex-president of Latvia Kārlis Ulmanis liked to be in the house Dauderi, unfortunately he could do it so quite rarely. Here the president had holidays, went for walks in the park but he never stopped working – the small corner in the park made for work and the photos showing him visiting the neighbouring brewery Aldaris as well as ministers visiting the house Dauderi prove that. Interestingly enough, even few does and a moose were fond of the park.

The Soviet occupation in 1940 changed the rhythm of life in the house Dauderi. After the World War II, the house became a kinder garden. The interior was neglected; all fire-places were bricked up. Later the house became a storehouse, and then some parts were turned into degustation rooms. In 1987, it became a property of Riga city October district Executive Committee of People’s Deputy Council so as to open October district Registry Office, however, the third Latvian National Awakening began and the destiny of the house Dauderi changed immensely. The new life of the house began when a Latvian collector and Maecenas Gaidis Graudiņš took a great interest in the house. In 1944, Gaidis Graudiņš together with thousands of Latvians was forced to leave Latvia because of the approaching Soviet military forces. During the many years spent in exile in Germany he collected items connected with the history of Latvia, thus creating a collection in 1958 and displaying it in Latvian Museum in Detmold, Germany founded by himself. After visiting the 1988 exhibition Latvia between Two World Wars in the History Museum of Latvia, Gaidis Graudiņš made an important decision to commit his valuable collection to the care of the society of Latvia. He chose the house Dauderi, that was almost empty and in a poor condition, as the most suitable place for his collection to be exhibited.

In 1989, Latvian SSR State Committee of Culture took over the management of the house Dauderi and it was under the Association of Latvian Art Museums. On 1st March, 1990, the law on the foundation of the Latvian Culture Museum Dauderi came into effect. Latvian SSR State Committee of Culture Department of Scientific restoration and the manager Sergejs Meijerovics began to renovate the house and clean up the neglected territory surrounding the house. On 27th June, 1990, during the 20th Latvian Song and Dance Festival Latvian Culture Museum Dauderi opens its doors to visitors, initially as a part of the Association of Latvian Art Museums, but later already as a separate museum.

As of January 1, 2010, the house Dauderi is a department of the National History Museum of Latvia.