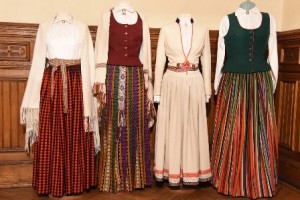 The collection of Gaidis Graudiņš  includes the period from 16th century until the 1980’s  and contains various groups of items – Republic of Latvia awards i.e. orders and their medals of honour (1918 – 1949), regiment badges of Latvian army (1919 -1940), medals (from 16th century until the first half of the 20th century), coins and paper money, photographs, documents, printed work including  Latvian literature published in refugee camps and during exile, memorial items of state and public figures.
The collection gives a view about the relics which people brought with them leaving Latvia  at the end of World War II.
Part of the museum collection gives an idea of Latvian cultural life and activities during exile. The collection was a gift from a collector Gaidis Graudiņš (Germany) presented in 1989 to Latvian Culture Museum Dauderi founded in 1990. The museum was re-established in 2010 as an additional department of the National History Museum of Latvia.