Exhibition “Centennial of the Latgale Congress” opened till September 8 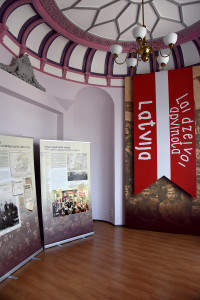 Only till September 8 in the small exhibition hall of the National History Museum of Latvia, located on Brīvības bulvāris 32,  mobile exhibition “Centennial of the Latgale Congress” will be on display.

The political topic of spring 1917 – the ideas of the united and autonomous Latvia – was determined by long-term historical experience. Therefore, the mobile exhibition “Centennial of the Latgale Congress” is dedicated not only to the Latgale Congress and its decisions, but it also marks those historical peculiarities, which characterise different developments in government, economy, social and cultural life, national identity for almost 300 years since the territory of Latvia was divided between several political powers.

The objects from the museum collections depict the spread of Catholicism, Polish language and the administrative system in Latgale, the Russification policy, carried out by the central government of Russian empire at the end of the 19th century, the national identity of the Latvians in Latgale in the beginning of the 20th century. Among the objects, the visitors can also see an interpretation of the process of the Latgale Congress of 1917 held in cinema “Diana” in Rēzekne by artist Jēkabs Strazdiņš, drawn in the mid-1930s.

Exhibition "Pottery of Latgale: Traditional and Contemporary" opened till September 8
Only until December 17 exhibition “Let the Daugava be”