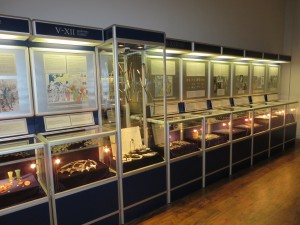 The permanent exhibition “Money in Latvia” gives a unique opportunity to view a riveting but complicated history of money in Latvia, which has been influenced by Latvia’s connection to the most important trade routes in Eastern Europe, and to the political and economic hegemony of German, Polish, Swedish and Russian lords at different junctures within the Latvian territory. The exhibition chronologically prepresents the use of money within the territory of Latvia: monetary transactions in the very earliest historical period, Roman coins (1th–4th centuries), silver during the so called non-coin period (5th – 8th centuries, and the 12th century), arab dirham (9th–11th centuries), Western European dinars (10th–12th centuries) and others.
Since the 13th century, the coins traded in Latvian territories were mainly minted locally. The exhibition displays 13th–16th century coins minted within the Livonian confederation —schillings, marks, vierchen and others, as well as those struck during the so-called Polish and Swedish times in the 16th–17th centuries, and also in Duchy of Courland over a two century period. In addition, the exhibition displays many coins used in international trade: silver dollars, and gold ducats. The exhibition effectively shows the particulars of transactions following the province by province incorporation of Latvia into the Russian empire, and gives insights into the development of minting technologies and the history of paper money.
The exhibition comprehensively shows the complicated and at times dramatic 20th century Latvian political and economic history as illustrated by the creation of the national currency, the lats, its deliberate destruction and successful resurrection during the last decade, and also the recent events – the joining of eurozone in 2014.