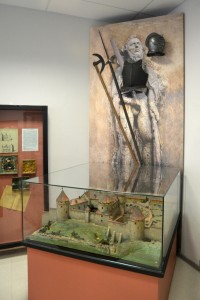 Livonia was a confederation of territorial powers: the archbishopric of Livonia, several bishoprics, the lands of the Livonian Order that was formed as the result of the Crusade in the 13th century in the territory of present day Latvia and Estonia. The confederation existed until the Livonian War in the middle of the 16th century. Livonia got its name from the ancient people – the Livs. The German bishops and Crusaders at the end of the 12th century first of all met with these indigenous people of the territory of Latvia in the mouth of the river Daugava. Livonia was also known as St. Mary’s land (Terra Mariana) – the christening of the territory was a tribute to Virgin Mary. As the result of the establishment of Livonia, the inhabitants of the territory of Latvia were under the influence of the Western Christian Church, medieval society of estates and feudal system of power developed; new fortified towns and stone castles were built nearby the old centres.

The major part of the territory of Livonia was under the rule of the Livonian Order. It was a religious and military organization, branch of the German (Teutonic) Order, which was led by the master of the order and consisted of brothers-knights, who had given a special oath, and priests. The minor part of Livonia was under the reign of the archbishop of Rīga and bishops. The relations between the landlords were formed both by mutual conflicts and joint efforts, for example, the establishment of common monetary system. Significant trait of governing was feudal or fief system – landlords (seniors) for performing definite obligations (military service) gave a fief (usually the rights to rule in a certain territory) to their vassals.

The descendants of the German-speaking chivalry and later the settlers from the Holy Roman Empire formed the privileged and most powerful part of the townsmen, knights and clergymen. A small part of the indigenous people also preserved part of their privileges and became minor landholders – the so called fief men. They performed the military service or other obligations for their senior. The most well-known local fief men were the so called “Curonian kings”. The majority of the indigenous people were peasants who paid or gave various duties to the holder of the fief. During the time of Livonia gradually disappeared the differences between the ancient peoples who had lived in the territory of Latvia, but, for example, in ornaments and dress beside the new traditions also the ancient pre-Christian traits were kept.

Towns became fortified centres of trade and craft with documented privileges of towns and their own government. The biggest town was Rīga – an important centre of the Hanseatic League, which main source of income was international trade between Western Europe and Eastern Europe.

The centre of the spiritual life was the Catholic Church. Under its shelter education, art, music flourished. However, outside the town during the whole period of the existence of Livonia pagan traditions maintained strong influence.

In the beginning of the 16th century the Protestant Reformation movement strongly influenced the spiritual life, power and administration of Livonia. As the Livonian landlords were part of the Catholic Church, their political influence was endangered, when the ideas of Martin Luther received absolute support also in Livonia. However, for several decades Livonian confederation continued to exist. Only in 1560, shortly after the beginning of the Livonian War, the troops of Russia’s tsar Ivan IV the Terrible defeated the weakened army of the Livonian Order and after the master of the Livonian Order subjected to Poland and Lithuania, Livonian confederation ceased to exist.