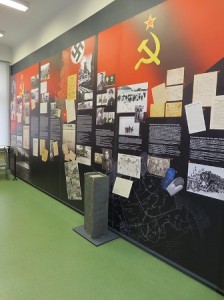 The destructive World War Two, the totalitarian USSR and German occupation regimes and their repressions became the most dreadful period in the Latvian history in the 20th century.

On 23 August 1939, the USSR and Germany divided Eastern Europe in the “spheres of influence” and occupied the independent countries, according to the agreement concluded secretly. On 17 June 1940, Latvia was occupied by the USSR.

During the first year of occupation (from 1940 to 1941), systematic repressions were carried out in Latvia against citizens considered to be dangerous or possibly disloyal to the Soviet regime. It was not important to prove the guilt; the person’s affiliation to a certain professional group or former activities was sufficient reason. Due to political reasons, in 1940 and 1941, more than 7 000 people were arrested in Latvia. The largest repressive action was the deportation carried out on 14 June 1941, during which 15 424 people were deported from Latvia to the USSR. The arrested were sent to the corrective labour camps (GULAG), the ones deported due to administrative reasons were placed at the Siberian collective farms.

On 22 June 1941, Germany attacked the USSR and war broke out. After several weeks the Red Army pulled back and in the summer of 1941, the territory of Latvia was occupied by Germany. Due to policy and repressions of the Soviet regime, part of the Latvian population was expecting the change of regimes with hope. However, the Nazi Germany occupation regime was as brutal as the Soviet one. Illusions that Latvians had as to the Latvian autonomy or restoration of independence did not become reality – German rule was established in the occupied regions in order to implement Hitler’s plans and change Europe.

The largest crime committed by the Nazi Germany in Latvia was genocide against Jews or the Holocaust. As a result of the racist ideology promoted by Hitler, the Jewish community of Latvia – approximately 70 000 Jews – was systematically destroyed together with approximately 20 000 Jews from other territories of Eastern Europe. Majority of Jews were shot in 1941. The German occupation regime turned against the political opponents of the regime, as well as Soviet activists, who had not managed to escape to Russia in the beginning of the war between the USSR and Germany. It has been estimated that approximately 10 000 citizens of Latvia were killed. Therefore, during the German occupation, all together approximately 80 000 citizens of Latvia were killed.

One of the most painful tragedies for Latvians, during World War II, was mobilization of both armies involved in the war. In 1943, the Latvian Voluntary SS Legion was formed involving more than 50 000 Latvians, approximately 80% of them were mobilized. In total, approximately 110 000 Latvian soldiers were serving in the German military forces, several thousand of them died in the battle. Approximately 70 000 Latvians served in the Red Army, majority of them were either Latvians living in Russia before or those, who were mobilized in 1944 and 1945. 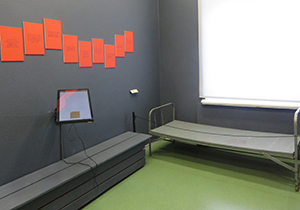 As of 1944, the Soviet occupation regime was restored in the territory of Latvia. The second occupation came with new political repressions. During the first years after the war, Latvians were actively involved in the national resistance movement. The goal of these national partisans was to restore independence of Latvia. In 1940s, many participants and supporters of the resistance movement were arrested, people, who had cooperated voluntarily or by force with the German occupation regime and othergroups of population, were punished. As of 1944 to 1945, approximately 38 000 people were arrested. The largest punitive action carried out during the Soviet occupation after World War II was deportation on 25 March 1949. During this deportation, 42 195 people – mainly women and children – were deported from Latvia to Siberia and other remote regions of the USSR. It has been estimated that during the first Soviet occupation as of 1940 to 1941 and afterwards as of 1945 to 1953, from 140 000 to 190 000 people suffered or died due to the Soviet repressions in Latvia.

Moreover, approximately 20 000 people escaped or emigrated to the West due to World War Two. Latvians, who had been called up for employment service or different military forces, stayed in Germany after the war, as they were afraid of repressions in their motherland. In 1944, people, who feared returning of the Soviet regime, escaped from Latvia to the West by sea and overland routes. As a result, after World War II, Latvian communities were formed in Sweden, Germany, USA, United Kingdom, Australia and other countries.