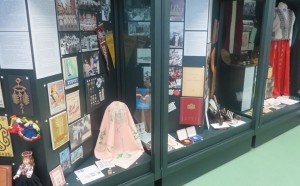 The second Soviet occupation of Latvia in 1944 and 1945 led to a mass of Latvian refugees fleeing to the West – as many as 200 000 people in all. The war, repressions implemented by the occupant regimes, and the flow of refugees created irreversible demographic and social changes. These losses were exacerbated by the social profile of the refugees – educated professionals of various fields and active people with much initiative.
The primary motivation for emigration toward the end of World War II was the restoration of the Soviet regime in Latvia. People well remembered the first occupation in 1940 and 1941 and, with good reason, were afraid of further repressions. They were sure that the thinking of the Soviet regime would not change. Indeed, after the war, the Soviet authorities considered all Latvians in Western countries to be ideological enemies, and until the collapse of the USSR, there were strict limitations and control of contacts between relatives on both sides of the “Iron Curtain”.
Most refugees in 1945 were located in the so called ‘displaced person’ or DP camps in Germany. This was known as the era of “little Latvia,” because some 125 000 Latvian refugees lived in various camps in one country and organised active cultural and social life, complete with Latvian schools, theatres, associations, choirs, book publishing and newspapers.
Mass emigration to new places of settlement began in 1947 and 1948, and by 1951, most Latvian refugees had left Germany. They settled in the United States (55 000), Australia (21 000), Great Britain (18 000), Canada (14 000) and Sweden (4 000), with 13 000 remaining in Germany. Highly educated refugees found that they lost their social and material status in the new situation, because their experience and qualifications from Latvia were not always recognised or of use. Still, Latvians very quickly improved living conditions in their new places of residence, ensuring education for their children and never becoming an isolated or impoverished segment of the relevant societies.
The USSR demanded in the wake of the occupation that the diplomatic offices of the Baltic States should be shut down, but several Latvian embassies remained open, because Western countries did not recognise the annexation of the three countries by the Soviet Union. Diplomats and Latvian organisations regularly reminded democratic governments and societies about what was happening in occupied Latvia, and they protested against any yielding before Soviet interests. True, over the course of time, the Baltic issues became a “frozen” problem for the international community, but for Latvians it always meant an occupied country and a divided nation.
Social life of the Latvians abroad confirmed the effort to preserve national identity, with people maintaining and developing various cultural areas. Political, aid and religious organisations were established, student fraternities and sororities were revived, and cultural, sports and research organisations were set up. Latvians devoted much time and money to cultural and social life, maintaining churches, schools, educational institutions and leisure venues. Many of the émigrés were patriotic, educated and active, which made it possible to organise intensive social and cultural life, including publishing houses.
Beginning in the 1960s, the main problem for the Latvian community was ensuring that children born abroad learned the Latvian language and culture. Some Latvians chose to allow their children to fully absorb themselves into the society and culture of the country of residence.
After the restoration of Latvia’s independence, some Latvians returned home, but most remained abroad, continuing to organise social and cultural life in the foreign countries. There were significant successes in transferring the Latvian language and culture to new generations between the 1960s and 1980s, while today, the Latvian communities that continue to exist abroad face an increasing threat of the complete assimilation of new generations, particularly in those cases in which Latvians live outside of the main centres for the diaspora.