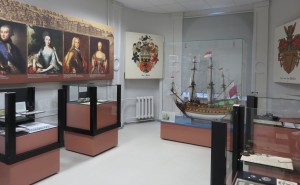 The Duchy of Courland and Semigallia was the longest-surviving state in the territory of Latvia during the Early Modern age. The duchy was created in 1561 after the defeat of the Livonian Order during the Livonian War, when the Master of Livonian Order sought after the protection of the King of Poland and Grand Duke of Lithuania. The duchy existed until 1795, when it was annexed to the Russian Empire after the last division of the Polish-Lithuanian Commonwealth. The territory of the Duchy of Courland and Semigallia covered the territory of Latvia to the West from the Daugava River – regions of Courland, Semigallia and Selonia. Different administrative system existed in the former Bishopric of Courland (District of Piltene). Initially the district of Grobiņa was not a part of the duchy as until 1609 it was under the power of the Duchy of Prussia.
The Duchy of Courland and Semigallia for more than two hundred years was under the reign of two ducal dynasties – Kettlers and Birons. The last Master of the Livonian Order Gotthard Kettler became the first duke after the Polish-Lithuanian king gave him the power over the former lands of the Livonian Order in the Western part of the territory of Latvia. The dukes were appointed by the king of the Polish-Lithuanian Commonwealth, but their political power at home was limited due to the extensive privileges of the local Baltic German landholding nobility.
In the Duchy of Courland and Semigallia there was no internationally important trade and craft centre like Rīga, but also in the small port towns – Ventspils and Liepāja – active trade took place, ships were built. The seat of the duke – Jelgava, also Bauska, Kuldīga and other towns were centres of craftsmanship and local trade. However, the main source of income was agriculture and the duchy remained a rural province. Spacious landholdings belonged to the dukes, while the owners of the private manors were mainly the Baltic Germans, who belonged to the nobility of Courland.
In the 17th century with an effort to expand the income of the duchy, there was a search for new profit-making opportunities in the economy. Duke Jacob Kettler in the middle of the 17th century promoted production of iron and copper goods, also textiles and glass in the local manufactories; he also sought to extend shipbuilding and fleet of Courland. Jacob Kettler also sought to make his duchy into a colonial power and for a short time ruled over Tobago Island (located off the northeast coast of the South American continent) and a fort in the mouth of the Gambia River (West Africa). Only by strengthening the economic power, the dukes were able to defend their political interests within the duchy and also internationally.
In the early 18th century the beginning of the Great Northern War and the struggle for the throne of the duchy overshadowed the development of the Duchy of Courland and Semigallia. After the marriage of the eighteen-years-old duke Friedrich Wilhelm Kettler to the next Russian Tsarina Anna Ioanovna, the duchy that was under the power of the Polish-Lithuanian Commonwealth became under closer control of Russia. After the death of the last duke from the Kettler dynasty, in 1737 Ernst Johann von Biron, the favourite of Russian Empress Anna Ioanovna, became the duke of Courland and Semigallia. The building of luxurious residences of the dukes, from which the largest were the rococo style palaces in Rundāle and Jelgava characterizes the most successful period of the Biron reign. The Biron dynasty reigned in the duchy until it was annexed to Russia in 1795.