Latvians in the Second Half of the 19th Century and the Early 20th Century: National Identity, Culture and Social Life 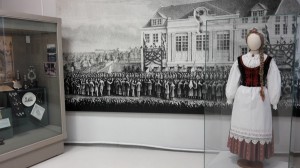 The 19th century was an age of a modernisation and new initiatives in the territory of Latvia. Former serfs became free farmers, the division between privileged and unprivileged people was gradually weakened through implementation of equal rights for all social classes (emancipation).  Important part of the modernisation was the Latvian national movement (the “National Awakening”) and the emergence of the Latvian nation. Under new economic and social circumstances, Latvian farmers gained new self-confidence. Latvians turned from an ethnic community (ethnos) into a fully-fledged nation. The new national identity involved many diverse elements, including understanding of the nation’s history, territory, value of native language, common cultural and public life, as well as future goals. A modern society, economy and cultural environment emerged, that was characteristic for Latvia also in the 20th century.

The emergence of Latvians as a nation was based on diverse circumstances and took a long period of time. It was influenced by governance and economic reforms in Russia, as well as changes in technologies, circulation of information, the emergence of new political movements, and the involvement of the masses in the public life.  All of Latvia’s territory was part of the Russian Empire during the 19th century, but the achievements of Baltic German elites in ensuring autonomy for the Baltic provinces meant that the Russian government had comparatively weak influence all the way up to the end of the 19th century, when the governance system in the provinces was reformed, and the use of the Russian language was expanded. The initial demands and political positioning of the Latvian national movement related to disagreements between the Baltic German nobility and the central administration of the Russian Empire. Hoping to reduce the role of the Baltic Germans, Latvian public figures in the mid-19th century supported the empire’s centralisation policies and reforms that should reduce the autonomy of the Baltic nobility.  Later in the 19th century, when Russification influenced the educational system, public life, and efforts to strengthen the Latvian language and culture, attitudes toward the policies of the tsarist administration became more critical in the Baltic provinces.

The emergence of the Latvian nation, as was the case elsewhere in the Central and Eastern Europe, was based on the national movement that was launched by educated Latvians. During the first half of the 19th century, there was an increase in the amount of information that was published in Latvian language – more diverse secular literature was available as well as the first newspapers. Simultaneously the school network in rural areas developed. The children of farmers more often attended secondary and higher institutions of education.  At Tartu University, Latvian students in the 1850s organised discussion evenings and called for research of and respect for the Latvian language and history. Baltic Germans ironically dubbed these activists the “Young Latvians,” thus drawing parallels to national movements elsewhere in Europe. The most vivid achievement of the “Young Latvians” in the 1860s was the publication of the newspaper “Pēterburgas Avīzes” (“St. Petersburg Newspapers”) in the 1860s.  Edited by Krišjānis Valdemārs, Juris Alunāns and Krišjānis Barons, the paper offered criticisms of the situation that existed in the Baltic provinces. The paper offered a view of the abilities of Latvians and the richness of Latvian culture and the Latvian language that was full of self-respect and confidence.

Over the course of time, the number of national movement activists, their audience and their areas of activities expanded.  Beginning in the 1860s, there was a major increase in the diversity of public life activities among Latvians, with cultural life and publishing in the Latvian language being expanded. During the latter half of the 19th century, a new generation of educated Latvians launched a process of establishing national literature, art and music, collecting and studying folklore and the traditional cultural heritage. The cultural and public life of Latvians developed gradually, but by the turn of the 20th century, Latvians had their own national literature and publishing world, national music and art. Important issues for Latvians related to the humanities were considered, particularly in relation to Latvian linguistics and history. New national traditions emerged, including the Latvian Song Festival that has became a world wide known Latvian cultural tradition.

A turning point for Latvians was the Revolution of 1905, which initially gained extensive support among Latvians because of external circumstances.The revolution helped to formulate the interests of Latvians, and the harsh repression of rebellions facilitated political debates and the consolidation of various political directions in Latvia. In the wake of the revolution, many Latvians lost any illusions about the political regime of tsarist Russia and its goals.

During and after the initial emergence of the national movement in the 1850s, there were no specific political goals about the future of the territory of Latvia.  Still, the emergence of the Latvian nation during the 19th century, rooted in the ethnic community of Latvians, made it possible to establish the independent Republic of Latvia in 1918, as well as the new country’s values and ideology.