Since the late 18th century in Europe the Industrial Revolution took place. Its main result in the production was the transition from manual labour to machine work. The invention of steam engine allowed starting to use machines, which were powered by mechanical means in the industry and transport. New trends also affected the territory of Latvia, the number of manufacturing companies grew, in particular, the number of factories in major cities, particularly in Rīga.
As a result of the Industrial Revolution and changes in production, in the late 19th century and early 20th century changes in various areas of life occurred. Modernization process included the industrialization, the improvement of the transport system and a diversity of changes in the society which became the main features of the age.
As since up to 1860-ies Rīga maintained the status of a fortress, the city was surrounded by fortifications and also there was a lack of free, large land parcels, the new factories were built mostly in the suburbs and beyond their borders. Sawmills, metalworking, machine-building companies, the cotton mills, oil mills, chemical product and paper, china and faience and other factories became an integral component of the panorama of Rīga.
The technical modernization of the production was interconnected with the development of the transport network. The construction of railways allowed to supply factories with necessary raw materials and to transport the manufactured goods. It also fostered the mobility of the population. People from the countryside or even other provinces of the Russian Empire went to the cities, where the factories were located. In Rīga in the period from 1863 to 1914 the population grew more than seven times, and this growth was provided by migration in particular.
The development of industry and transport changed also the environment. The forests were cut down, the railway lines were built since 1860-ies in the territory of Latvia, in the cities and towns new industrial and residential areas appeared. Technical modernization was also related with new threats. The early machinery was unsafe and accidents happened often. The expansion of industry was often chaotic, without taking into account the workers’ living and working conditions. Urban growth and the increase of population forced to plan the arrangement of the urban environment and infrastructure. In Rīga in the second half of the 19th century the modernization of the city streets network, transport, sewerage, water supply and lighting system was begun.
New inventions also influenced the speed of the news exchange. On November 1, 1852 the Rīga-Bolderāja electromagnetic telegraph line began to operate, but in 1882 – the first telephone exchange in Rīga with 53 subscribers. Travelling became more accessible, the spread of the printed word expanded, social layer or gender-related restrictions and prohibitions were diminished. An increasing number of people were able to get acquainted with the diversity of the world, freely choose their place of residence and occupation. 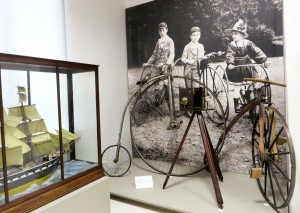