Living Environment and Daily Life in the 19th Century and the Beginning of the 20th Century: Interiors of Biedermeier Style and Art Nouveau Style 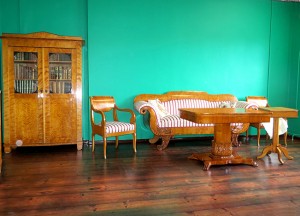 This hall invites the visitor to have an insight in the manor house of the countryside of the territory of Latvia in the 1830s-1840s and in the tenement apartment of town in the beginning of the 20th century.
The interior of the living-room of a manor house in the Biedermeier style consists of furniture of that period, works of art and household items from the collections of the museum and it reflects the cultural environment characteristic to the manor and the lifestyle of the local nobility.
During the Biedermeier age there were highly valued the patriarchal relations in a family and the dwelling, which yielded shelter after concerns of everyday life, remained closed for all noises of the outer world. In creation of the interior there was expressed the aspirations for calm and well-arranged life. A person here was surrounded by a world of simple things, which was twined by a light whiff of sentimentality.
The warm, light brown shades of furniture, airy curtains, flowers, the small portraits, arranged symmetrically on the walls, miniatures, water-colour paintings, the graphics depicting the landscape of Courland and Vidzeme, town views, the cheap modern silhouette clippings – all that brought to the Biedermeier interior the mood of cosiness and intimacy.
At the end of the 19th century in Europe, a new style of art, encompassing all forms of art emerged. It was the Art Nouveau, which manifested in architecture, the facades of the buildings and in interior decorations, stained glasses and iron decorations, in furniture, in lighting, in china, glass and metal tableware, in textiles, in clothes and accessories, in jewellers’ art, in the design of books and periodicals, in applied graphics, in appearance and decoration of various everyday items.
In search of the new means of expression the artists of Art Nouveau turned to nature, which animated to create irregular, asymmetric, curved and wavy forms. Curved shape and rhythm became the most typical feature of the formal style. Characteristic to Art Nouveau ornamentation were the motives of vegetation – flowers (irises, lilies, orchids, daisies, narcissus, lilies of the valley, etc.), leaves of the plants, stems, buds and aquatic plants. The depictions of animals – swans, peacocks, snakes, dragonflies – were included in the ornaments. Very typical were female figures with loose hair, exalted, enthusiastic gaze. Natural forms and the objects themselves were subjected to decorative stylization.
The traits of Art Nouveau appeared in the territory of Latvia around 1900. The exhibition of industry and crafts, for which pavilion was decorated with rich Art Nouveau architectonic and ornamental motifs, dedicated to the 700th anniversary of Rīga, that was held in 1901, facilitated the bloom of Art Nouveau. Symbolically the beginning of the new 20th century in the exhibition is marked by the poster of the exhibition, printed after the sketch of the artist R. Zariņš.
The economical flourishing of Rīga until the World War I was inseparably linked with large-scale construction works, mainly building of multi-storey tenement houses. It is possible to see the Art Nouveau interior of a living room in a tenement house of a town that characterises the housing arrangement in a town in the beginning of the 20th century.
The conservative taste of the civic circles facilitated the durability of the tradition of Historicism in apartment interiors. Widespread was the so-called “Suite of Napoleon III” of furniture, reflecting features of the Empire style: a sofa and two chairs. Gradually the elements of Art Nouveau appeared in the interior furnishings of the living rooms. The elements of Art Nouveau often intermingled with the ornamental motifs of Classicism. Both imported and locally-made furniture, lighting, household items, china and glassware adorned with plastic shapes and decorations characteristic to Art Nouveau became widespread. 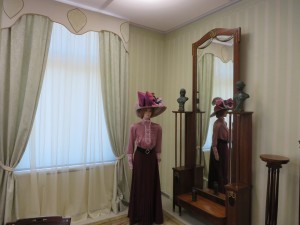