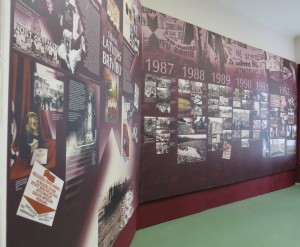 The renewal process of the independence of Latvia in the turn of the 1980’s-1990’s took place parallel with changes throughout Mikhail Gorbachev’s led Soviet Union, in which Latvia was unlawfully incorporated in 1940. However, in the Baltic States and Latvia the current issues, demands and popular movement of 1987-1991 differed significantly from the processes in the other parts of the USSR.

Characteristic to the process of change in the Baltics was the significance of history and past events. The evaluation of the concealed and undesirable topics to the Soviet regime, such as the division of Eastern Europe countries between totalitarian powers after the secret agreement between Hitler and Stalin in 1939, the occupation of Latvia in 1940, the Soviet repressions and mass deportations, were publically expressed after 1987. Memories of the past, including Latvia’s “voluntary joining the USSR”, differed radically from the official Soviet history of the 20th century that had existed for decades. Public events were held on the commemoration days of the Soviet power’s deportations of Latvia’s population and on other important historical dates already starting from 1987. The memories of the independent Republic of Latvia and the experience of the totalitarian powers’ repressions were still alive in the society. They permitted to strengthen the confidence of restoring national independence from the USSR rapidly and clearly.

The period from 1987 to 1991 has obtained the title The Third Awakening, which also is a straight reference to the Latvian historical experience. Academician Jānis Stradiņš formulated and substantiated the term. He considered that historical and cultural heritage, awareness to the importance of Latvian language and its essential role in the development process of nation in the end of 1980’s can be compared with the importance of the Young Latvian movement in the middle of the 19th century (The First Awakening) and the declaration of the state’s independence and its gaining in 1918-1920 (The Second Awakening).

The first public actions organized by the human rights group ”Helsinki-86” were held in Riga on 14 June and 23 August, 1987. The questions concerning nature protection, unreasoned industrialization and immigration, discussions about the building of Daugavpils hydro-electric power station and subway of Riga caused wide response and interest. The Environmental Protection Club (abbr. in Latvian VAK) was founded in 1987.

The political demands – the increase of the autonomy of Latvia, the protection of Latvian language and culture, the restriction of migration – were marked stricter in 1988. The Latvian National Independence Movement (abbr. in Latvian LNNK) held radical position. The discussions in the press, rallies with thousands of participants, the emergence of new non-governmental organizations in 1988 indicated that the crucial issues were not only the point of view of a narrow interest group, but a manifestation of the nation’s problems. The situation of Latvian culture and language, demographic problems, concealed issues of history were discussed in the plenum of Creative Unions, held on 1-2 June, 1988. 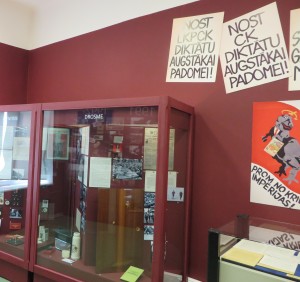 The founding congress of the Popular Front of Latvia (PFL, abbr. in Latvian LTF) was held on 8-9 October, 1988. The PFL became the largest non-governmental organization in the history of Latvia. It united around 100 000 people in a few months’ time. Initially, its political aims were focused on the sovereignty of Latvia within the USSR, but the PFL stood up for the restoration of the independence of Latvia already in May, 1989. Nation’s support was attested by the convincing victory of the PFL in the first free elections of the Supreme Council of Latvian SSR held on 18 March, 1990. The Supreme Council adopted Declaration “On the Restoration of Independence of the Republic of Latvia” at its first session held on 4 May, 1990. With it the work of the Constitution of Latvia (Satversme) adopted in 1922, was renewed, setting the transitional period of the restoration of independence.

After the adoption of the declaration, the confrontation between the Supreme Council, which was supported by the majority of the population of Latvia, and the defenders of the “old order” escalated. The culmination of the confrontation was the barricades of January, 1991, when after the soviet forces attacked Vilnius Television Centre, thousands of Latvian residents gathered in Riga to defend the strategically important objects. The structures of Moscow’s forces continued provocations in spring and summer, 1991. The last attempt to restore the old regime took place on 19-21 August, 1991, when in Moscow was an armed takeover. Radio, TV, telephone exchange were occupied in Riga, but democratic forces won in Moscow. The Constitutional law “On the Status of Statehood of the Republic of Latvia” was adopted on 21 August, 1991. The independence of the Republic of Latvia was restored de facto.