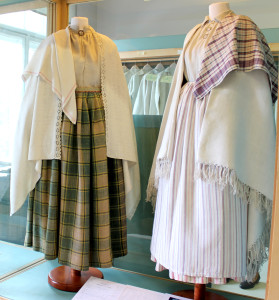 Traditional clothing is a significant part of the Collection of Clothing and Textile of the museum’s Department of Ethnography. It is made of natural materials: flax, sheep wool, cotton. Irreplaceable material in traditional costume is linen fabric.

Each clothing starts with a plain or embroidered linen shirt. Until the beginning of the 20th century peasant children till the school age wore only linen shirts. When starting the school, the children got their first trousers or skirts and footwear. Shirts were sewn from bleached and also unbleached linen fabric. Women’s shirts were more complicated and usually had two parts. The upper part of the shirt was usually made of fine linen fabric, in northern Latgale – embroidered linen, but the lower part of the shirt was made from coarse linen fabric or oakum fabric woven in plain weave or ticking – diagonally or in fish-bone pattern. In rare cases, women’s shirt was sewn from one fine piece of linen fabric.

In order to get bright white flax and to weave the cloth, it was necessary to make a series of successive work: pick the ripe flax stalks, bundle together, cut off the bolls. For removing the skin from the flax stalks (retting), they were left in a small pond, covered with wooden blocks or stones. After retting, the flax was spread out in the meadow to dry out, later it was beaten between wooden blocks (beetling), separating from the fibrous shingles or parts of the skin. After beetling came scutching, when with a knife-like wooden tool parts of the skin were removed from the silky fibres. Before spinning hackling was done – fibres were combed using iron brushes of different roughness to obtain oakum and fine flax fibres for spinning. The combed fibres were twisted, placed on a distaff and spun into a linen yarn using spindle or spinning wheel.

A single yarn linen of various coarse was used extensively for linen and wool-mixture fabrics. For making skirts and other garments, linen was used as warps. Lace was knitted from linen yarns. The shoulder cover made of linen cloth was called snātene. It could be made either of simple or fine patterned linen fabric. The linen shawl was put on shoulders when going to church or celebration. Plaited and woven linen bands were used as various ties – apron bands and belts, bands for skirts, bands for small bags, bands for sacks, horse-blankets and traveller’s bundles.

Linen yarn was also dyed, more often in dark blue colour, less often – in red, black or other colours. The colour stripes of linen fabrics usually were complemented by cotton or woolen yarns. Often, red cotton yarn was used in embroidery and woven into a fabric. For embroidery and stitching both bleached and unbleached linen yarns were used. Sewing work was carried out by hand, which was especially characteristic to linen clothing.

Linen clothing were especially useful in summer. The women’s clothing for work in the summer was a linen shirt that was tied with a belt or a shirt and linen fabric skirt. On hot working days men wore the shirts over their trousers.

The exhibition also includes tools used for flax processing from the museum’s Toolkit and Household Item Collection: spindles, distaffs and distaff’s needles for fixing the twisted flax. Needles were made both of wood and metal. Some metal rings were occasionally fastened to the metal needles – while spinning, they sounded and took away the spinner’s sleep. Such needles were also used for beating the rhythm for bridal dances. Unusual is the object through which the linen yarn was taken when tucking a ball. Some objects used for weaving are on display – an item, through which several warps were taken through on warp winder, shuttles, tables of patterns, combs on which belts and bands were woven.