Exhibition “Gloves, Mittens” Only Until March 5 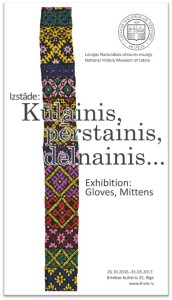 The exhibition of the Latvian ethnographic gloves and mittens is made as a double-sided folding stand.  The photographs  depict the collection of mittens and gloves that are stored in the National History Museum of Latvia and the traditions of knitting mittens and gloves in the 19th and 20th century, but the photographs of the Board of Monuments, taken in 1920s-1930s show the way from the wool processing up to the result – a glove or a mitten.  In addition there are also unique original knitted objects from the collection of the museum.

Gloves and mittens have many different uses, and they are far more than ordinary pieces of clothing. Since ancient times, they have had a special role in everyday life and during special occasions. For generations, a pair of mittens or gloves has been related to the most important events in human lives – Christenings, weddings and funerals. The mittens and gloves testified to the process and were a symbolic gift that ensured personal and family favour and success.

The formation of the Collection of Clothing and Textile began in the second half of the 19th century, when the Latvian or the Ethnographic Museum of the Rīga Latvian Society (now the National History Museum of Latvia) was established in 1869. In 1888 the museum prepared a catalogue of necessary items, among which also a pair of woollen and linen white women’s gloves. Jānis Birzulis from Cempji in Trikāta congregation donated the gloves to the museum, informing that they were used as church gloves some 80 years ago.

Of importance for the formation of the collection was the decision to organise the first Latvian Ethnographic Exhibition as a part of the 10th Archaeological Congress in Rīga in 1896. The press published calls for the submission of objects for the exhibition. The Science Commission of the Rīga Latvian Society, in turn, organised 11 expeditions to various Latvian regions in 1894 and 1895, during which it not only collected items, but also took pictures and drew the most characteristic anthropological types of the inhabitants, traditional clothing and buildings. While preparing for the exhibition, some of the oldest gloves and mittens that are in the collection were obtained, with former owners saying that they were knitted in the second half of the 18th century and in the beginning of the 19th century. There were two pairs of mittens and gloves from Bauska region: around 70 years old mittens from the dowry that were donated by Grieta Revelis from Vecmuiža (Vecumnieki) parish, and about 100 years old gloves donated by Anna Maizit from Jaunzemji in Bārbele parish.

The collection of knitted mittens and gloves stored in the National History Museum’s of Latvia Collection of Clothing and Textile is so extensive thanks to many people who helped to collect the items in the beginning of the 20th century and in the 1920s and 1930s. One of the great enthusiasts in this regard was Matīss Siliņš, who was the director of the museum and, for a long time, its only employee. In summers he went on brief expeditions or excursions, as he himself called them. In August, 1921 he visited several parishes in Kuldīga district, visited also the Curonian kings in Turlava parish and brought back to the museum in Rīga colourful mittens from Tuņņi farmstead in Sātiņi parish, knitted in modern times, as well as fine knitted white gloves with knitted ornament bands from the owner of Vec-Kraķiņi farmstead in Turlava parish, Līze Šmidt (née Peniķe).

The way of taking several dozen pairs of gloves and mittens to the museum is relate to people who are of importance in present-day Latvian cultural history – Arvīds Dzērvītis, Mērija Grīnberga (née Grosvalde), Emilis Melngailis, Jānis Rieksts, Jānis Sudmalis and Rihards Zariņš. Interest in nation’s culture and the desire to preserve its values once encouraged them to collect ancient items and to put together their own collections in addition to the work that they did in their own fields.

The collection received a particularly large number of new items during the first half of the 20th century, when the Ministry of Education established the Board of Monuments. From 1924 until 1931, the Board of Monuments organized expeditions for identifying monuments throughout the territory of Latvia with the aim of protecting and collecting disappearing aspects of Latvian lives. Unlike previous work of collecting items, the Board of Monuments was not only collecting objects, but also tried to get as much information about the items and their history as possible. They took photos and drew them. Starting with the second expedition that was held in Rēzekne district in 1925 special survey sheets were elaborated to note information from the owner of the gloves or mittens: who knitted them, with what aim, how old they were and when and how they were used. Mittens and gloves and their ornaments were drawn on the survey sheets. Also various names of mittens and gloves, their parts and names of ornaments used at those times in various regions of Latvia were written down on the survey sheets.

During the second half of the 20th century, one of the tasks of the Department of Ethnography was to supplement the collection with materials from the Soviet period. The goal was to put together a collection of items produced by the country’s most outstanding craftspeople so as to trace the development trends of folk art during the Soviet era, which could be used as an example for educating younger generation craftspeople. During this period, the museum collection was supplemented with knitted mittens and gloves from major (republic-scale) folk art exhibitions, as well as exhibitions of applied folk art studios. These items successfully merged the elaborated knitting traditions with the desire of each master craftsperson to present an individual style in terms of ornaments, combinations of colours, the form of the gloves and mittens, and the texture of the knitted items. The ability of mittens and gloves to transform from a piece of clothing to a unique and miniature piece of artwork appeared in the mittens that were knitted by Jette Užāne. The master craftswoman included in mittens her observations of nature, reflections on human life and her attitude towards various events.