The Latvian Soviet Socialist Republic (Latvian SSR) or Soviet Latvia was an administrative unit of the Soviet Union (USSR) that was established due to the Soviet occupation of 1940. The Soviet regime was totalitarian – based on all-encompassing ideology, focused on combatting opposing views, repressive and militarised. The Soviet Constitution formally spoke to democratically elected governance institutions, but in practice, the Soviet regime was a dictatorship run by the Communist Party. In Soviet Latvia, power was in the hands of the Central Committee of the Latvian Communist Party, which controlled all areas of life. To preserve and strengthen the regime, the power of the security agency – Committee for State Security (KGB) – was used as well as censorship, massive propaganda, a dogmatic and ideological educational system, culture and public life.

The ideological postulates of the Soviet regime did not change much, though mechanisms for control of society changed. During the Stalin regime until 1953, there were massive physical repressions, including arrests, executions, imprisonment and deportations. Mass arrests ended after Stalin’s death, but strict control of society was still maintained. The KGB had a vast range of informers. It monitored people, bugged their phone calls, terrorized or arrested them, put them into psychiatric hospitals. People were also excluded from educational institutions, sacked from work due to their political conviction. Of importance to the regime was the battle against so-called “ideological diversion” in terms of different understandings about history and national culture, as well as the spread of Western culture and ideas from Western Europe and the USA.

The Soviet Union actively used propaganda to strengthen its regime. Cultural and public life, the press, radio and television were strictly censored, thus achieving full ideologization of public life, including the mass media, books and music. Everything became part of Soviet ideological propaganda. Popular means for propaganda organisers were posters and wall newspapers. Educational content at schools was subject to ideology, too, with schools trying to convince students of the democratic nature of the regime, the achievements of the state and its superiority over Western democracies.

Despite the propaganda pressure, part of the Latvian society tried to maintain and preserve Latvian cultural values, historical memory and traditions. Literature, theatre and music in Latvian language were of importance. The Latvian Song Festival, for instance, continued to be organised despite ideological pressure. Since 1960s the Latvian traditional applied arts, Poetry Day, Art Day and Theatre Day gained huge popularity. These events distinguished themselves with relative free thought and national distinctiveness.

The Soviet Union had a so-called “planned economy,” which was based on no private property, national planning, and was an important component of ideology and propaganda. Industry and agriculture in the Latvian SSR were rapidly restructured in accordance with the system and needs of the USSR in the 1940s. As a result, there was rapid industrialisation, which, in turn, facilitated unlimited immigration. Collective farms (kolkhozes and sovkhozes) were established in accordance with the Soviet system, thus destroying traditional family farms. Industrial tempos and quality were facilitated by popularising the so-called Socialist competition. Output was enhanced basically not by modernising industries, but instead by creating new jobs. Despite these problems, however, Latvia, Lithuania and Estonia all preserved higher levels of development between the 1940s and 1980s than other parts of the USSR. 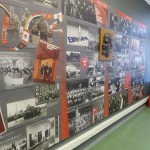