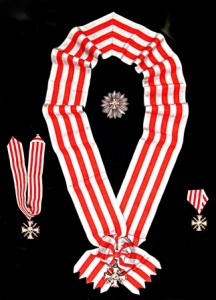 Only one day, November 11, there will be an opportunity to see the complete set of the Lāčplēsis Military Order, once given to General Jānis Balodis (1881–1965).
The Lāčplesis Military Order was the first and the highest official award in Latvia. It was founded on the initiative of the Supreme Commander of Latvian Army Colonel Jānis Balodis. The order was awarded to the soldiers of Latvian Army and the former Latvian Riflemen Regiments for merit in military action as well as to foreigners who had taken part in the War of Independence of Latvia or given other type of contribution to the founding and development of the state of Latvia.
The order had three classes: I, II and III. The cross of the Lāčplēsis Military Order is a stylized fire cross (swastika) of white enamel with a red border, set in gold; gilded swords cross behind it. A colour image of the epic hero Lāčplēsis (Bearslayer) on a white enamel ground stands on the centre obverse of the medallion. “11th November 1919” is inscribed on the reverse of the medallion; ”For Latvia” is engraved in Latvian on the ends of the crosses. The Lāčplēsis Military Order was designed by J. Liberts. The holders received also a diploma designed by R. Zariņš that gave a brief description of the achievement for which the order had been awarded to the respective person.
11th November 1919, the date when Latvian Army expelled Bermondt-Avalov troops from Rīga, is symbolically accepted as the foundation day of the Order. However, for the first time the order was awarded on 11th November 1920, after the Constitutional Assembly had passed the Law on the Lāčplēsis Military Order (on 18th September 1920). The first Award Ceremony of the Lāčplēsis Military Order took place on Esplānade Square in Rīga on 11th November 1920, with President Jānis Čakste personally presenting the orders. The last meeting of the Board of the Order dealing with issues pertaining to the awarding of the order took place on 1st November 1928. In the course of eight years of the existence of the Lāčplēsis Military Order the orders of the I Class were awarded to 11 persons, among them were Generals Jānis Balodis and Krišjānis Berķis, Colonels Frīdrihs Briedis (posthumously) and Oskars Kalpaks (posthumously), Estonian General Johann Laidoner, Polish Marshal Jozef Pilsudsky, French Marshal Ferdinand Fosch, King of Italy Victor Emanuel and Prime Minister Benito Mussolini and King of Belgium Albert I. 61 persons (18 Latvians and 43 foreigners) were awarded with the II Class of the order and the III Class was awarded to 2072 persons (1600 soldiers of the national army, 202 former Latvian Riflemen and 271 foreigners).
Along with Latvians (soldiers of Latvian Army and Latvian Riflemen) the order has been awarded to 11 Lithuanians, 47 Germans, 15 Russians, 9 Poles, 4 Jews and 3 Belarussians. Among the holders of the III Class of the order there are also three women: Valija Veščūna-Jansone, Līna Čanka-Freidenfelde and Elza Žiglevica. The order has been awarded to the soldiers of the Armies of Estonia, Poland, Finland, France, Czechoslovakia, Lithuania, Denmark, Italy, Belgium, USA and Japan. Among the chevaliers of the order there are not only people but also the Fortress of Verdun, which was awarded for the heroism of its defenders during the First World War.
On November 11 the museum will be opened form 10 to 19. Entrance – free of charge.