Exhibition “On the Way to the Latvian Nation: the Ethnic Consolidation of Latvians” is opened only till September 18 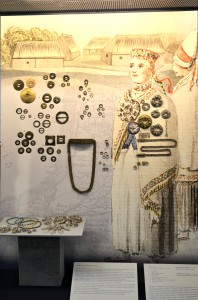 Only till September 18, 2016 the exhibition is opened to visitors. This exhibition is the continuation of the National History Museum’s of Latvia series of exhibitions “Latvian Roots”, which started in 1996. Within this series several major exhibitions were organized in Latvia and Lithuania. These exhibitions were dedicated to the ancient peoples, who were living in the present-day territory of Latvia in the 2nd–12th century – Curonians, Semigallians, Livonians, Latgalians, and Selonians – their ethnic history and material culture.
The exhibition “On the Way to the Latvian Nation: the Ethnic Consolidation of Latvians” gives an insight in the ethnic consolidation process of the ancient peoples and the formation process of the Latvian nation. The nation is a historically developed group of people, which has a common language, its own historical territory, common memories associated with their history, traditions and culture. The exhibition displays four major dimensions that characterize the Latvian ethnic identity and reflects its formation process, that is, how the territory inhabited by the Latvians had been formed, what changes have affected the spiritual and material culture, traditions and language. The way to the Latvian nation covers the period starting from the 13th century, when as the result of the Crusade significant changes occurred in the political, economic and cultural life of the indigenous peoples; and ending in the 19th century, when as the result of the socio-economic and political processes the Latvian national movement developed and the formation of the nation in its political sense begun. In the research of the history of Latvia much attention is focused on the Latvian national movement, formation of Latvian nation in the 19th century. Relatively less known is the pre-history of this process and its preconditions. This exhibition depicts the aspects of the Latvian nation’s ethnic background that are described using the museum’s archaeological and ethnographic collections, written sources and researches in linguistics.
The formation of the Latvian nation has been a long-term process; it did not happen in a definite year, and it did not finish on a definite day. This process lasted for several centuries, from the 13th to the 19th century. It has been influenced by several factors related to government and regional situation, socio-economic development and changes in culture. Still there is no summarizing research of this problem, dealing with complex analysis of available sources. It has to be taken into account that written, linguistic, ethnographic and archaeological sources clearly do not reflect the formation course of the Latvian nation. On the one hand they provide information about the consolidation of the ancient peoples and decrease of the differences, but on the other hand – also reflect the particularities, which have been preserved for a long time and even re-emerged anew.
Several features which characterize the Latvians as an ethnic group, such as historically populated territory, language and culture, had formed in the Middle Ages and in the beginning of the Early Modern age (13th–16th c.), when there were favourable conditions for the consolidation process of ancient peoples. During the medieval period the particularities of the ancient peoples’ material culture began to disappear, household traditions unified and the formation of the Latvian written language begun. In the turn of the 15th/16th century in the written sources the term “Latvians” became more commonly used for attributing the indigenous inhabitants of the present-day Latvia.
During the subsequent centuries (17th and 18th c.) the progress of the Latvian nation’s formation was influenced by administrative and territorial fragmentation, which contributed to the formation of district uniquenesses and the preservation of differences. It manifested in the persistence of local (village, parish, region) identity, in religious affiliation, in language, in spiritual and material culture.
Latvians began to realize themselves as a separate unit – the Latvian nation, in the end of the 18th century. In the course of the 19th century the nation’s self-consciousness was raised under the influence of the national movement. At the same time the self-consciousness of Latvians as an ethnic group also formed the nation’s sense of community, which subsequently resulted from the efforts of the Latvians themselves, their will and determination.