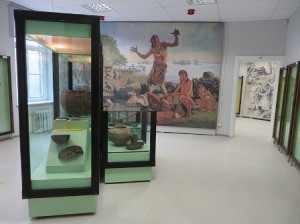 At the end of the Ice Age, 14 000–12 000 years ago, the territory of Latvia became free from the ice sheet. The first human settlers arrived in this tundra landscape in the Palaeolithic, 11 000 – 12 000 years ago, following the reindeer and keeping to the major river valleys and the shore of the Baltic Ice Lake.

Natural conditions in the Mesolithic (9000 – 5400 BC) were similar to those of the present day. People settled permanently on riverbanks and lakeshores, and subsisted from hunting, fishing and gathering wild plants. These people made weapons and tools from flint, antler, bone and wood. They belonged to the Kunda Culture, which extended across a large area of the East Baltic.

The beginning of the Neolithic (5400 – 1800 BC) was marked by the introduction of pottery-making. In this period, amber was also extensively worked. The Neolithic also witnessed the beginnings of animal husbandry and agriculture.

In the Early Neolithic, the Narva Culture developed locally and in the Middle Neolithic, around (4100 – 2900 BC), the Comb Ware people arrived in the territory of Latvia from the north-east – regarded as the ancestors of the Finnic peoples.
At the beginning of the Late Neolithic (2900 – 1800 BC), the Corded Ware people, regarded as ancestors of the Baltic peoples, arrived in the area of present-day Latvia. They practiced the techniques of polishing flint and drilling stone artefacts.

The earliest examples of Stone Age art from the East Baltic include ornamented bone and antler implements. In the Neolithic, animal and human figurines were also made, as well as amber beads and pendants.

The Bronze Age (1800–500 BC) witnessed the transition from an economy based on food procurement to one based on food production. Stock-keeping and agriculture became increasingly important. The first hill-forts were built.

In the Earliest Iron Age (500 BC – 1st cent. BC), the first iron objects came into use. With improved tools, agriculture gradually emerged as the dominant economic activity.

An important development in the Early Iron Age (1–400 AD) was the spread of knowledge about how to smelt and work iron. Bronze, obtained by means of exchange contacts, was used for making a wide variety of ornaments.

In the Middle Iron Age (400–800 AD) and the first half of the Late Iron Age (800–1000 AD), the archaeological cultures of the Early Iron Age underwent complicated processes of ethno-cultural change, developing into the Baltic peoples (Couronians, Semigallians, Latgallians and Selonians) and Finnic peoples (Livs, Estonians and Vends) that we know from written sources At this stage of development, society was organised into chiefdoms.
In the 5th–10th century, people lived mainly in open, unprotected settlement sites. District centres had hill-forts with defences, serving as refuges in times of danger. Only some hill-forts were permanently inhabited. 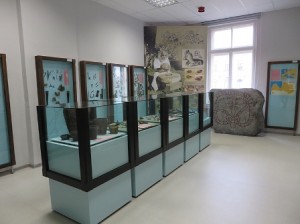 In the second half of the Late Iron Age (1000–1200 AD) the distinctive culture of Latvia’s indigenous peoples reached its highest point of development. The economy was still based mainly on agriculture and stock-keeping. The three-field system was gradually introduced, and grain was ground in the rotary quern, which superseded the use of grinding stones in around the 11th century. 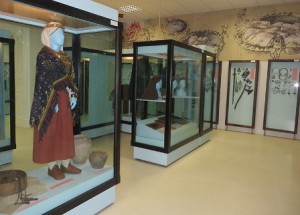 Written sources indicate that, by the late 12th century, the indigenous peoples had developed their own states, or at least the process of state-formation was nearing completion. Social structure was complex: at the top of the hierarchy were the rulers, subordinate to whom were district and village elders. The majority of the population consisted of freemen, with thralls at the bottom of the social scale. The upper stratum of society lived in castles.

International trade played an important role at this time. The area of present-day Latvia formed part of a network of trade routes connecting northern Europe with areas to the south-east.