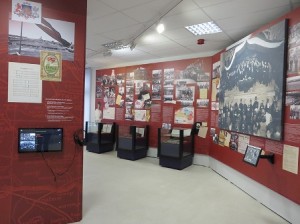 On 18 November 1918, independence of the Republic of Latvia was proclaimed. Latvians had established a democratic country guaranteeing freedom of rights, speech and economy to people of different nations. Establishment of an independent country is the most important achievement of the nation in the 20th century. The independence of Latvia was, however, threatened by the Red Army and the Bolsheviks. In January 1919, the Provisional Government of the Republic of Latvia was forced to leave Rīga. Public support for the Soviets was small and in summer of 1919, the Provisional Government of the Republic of Latvia had managed to form the armed forces. During the War of Independence, from 1918 to 1920, Latvian Army had to fight against the Red Army, different German Army units, as well as the so called Volunteer Army of the Western Russia. The victory took more than 3000 lives. During World War I and the War of Independence, cities and countryside of Latvia were destroyed. 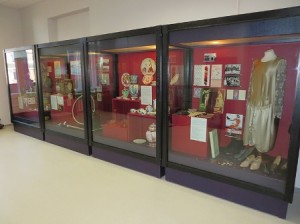 products to the local and foreign markets. In 1930s, flax and flax seeds, butter, meat and other agriculture and food industry products, along with fabrics and textile goods, and timber formed a significant part of the Latvian export. Majority of products, however, were consumed in the internal market. At that time Latvia succeeded in the electro-technical and automotive industry. The quality of radios, telephones, cameras and other devices produced by VEF (abbreviated: State Electrotechnical Factory) was well-known in Latvia and abroad. 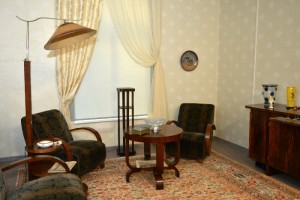 During the period between the two World Wars Art Deco influenced design development in Latvia. For the first time the museum displays the living room furnishings of the 1930-ies, showing quality of local furniture. Sofa and two armchairs are made, presumably, in Rīga in 1930-ies, and are typical examples of  Art Deco design of that time. In one of the workshops of local furniture  the servant with excellent walnut veneer was produced. Porcelain figurines, decorative glass vases, fruit tray, produced in Iļģuciems glass factory, and other objects of applied arts give an idea of the taste of that time.

On 15 May 1934, coup d’etat was carried out by Kārlis Ulmanis, the first Prime Minister of the Provisional Government of the Republic of Latvia. As a result, the democratic system was destroyed, the Parliament was dissolved and authoritarian regime was established. However, the darkest days of Latvian nation were ahead. According to a secret protocol between Stalin and Hitler attached to the so called Molotov-Ribbentrop Pact, concluded on 23 August 1939 by the Nazi Germany and the USSR, on dividing Eastern Europe, Latvia lost its independence on 17 June 1940, when tanks of the Red Army entered Latvia.